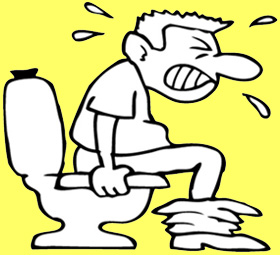 I’ve been sitting here for a good 10 minutes, trying to release whatever crawled up my ass and died, but she’s fighting back. I’ve got news for ya Sally, it’s time to push! Don’t push too hard though. I might blow an O ring. Seriously, it feels like there’s a rock in my stomach, and no matter what, it won’t come out! I had Texas Roadhouse for lunch today. But for this entry, we’ll call it roadkill. I arrived at the restaurant a couple minutes before my designated pick up time. Little did I know, on sundays, it’s the cool thing to do for the residents of every fucking nursing home to go out to dinner (at 12pm). Needless to say, I had to wait an extra 20 minutes for my already late order. This didn’t do well for the food. Finally, it was ready and I headed home to nom.

Much to my disappointment, the food was refrigerator cold by the time I was ready to eat. So I did what any fat kid would do and walked right past the microwave, and sat down to eat my ice cubes. About 20 minutes after I was done, the food was ready to make its grand exit. So I finished a game of Blackout with the guys and made my way to the throne, where I would conduct my business. Things didn’t start off very well. Then, it was like the devil himself kicked in my sphincter and brought every demonic being he could gather for the quickest Viking type toilet raid possible.

There was fire, there were explosions, the clouds in the sky all turned brown (go figure). It was anarchy. After the raid was over, the bathroom was decimated. Not a solid survived. It’s gonna take a team of professionals to figure out who the culprit is, but my money is on the cinnamon butter.